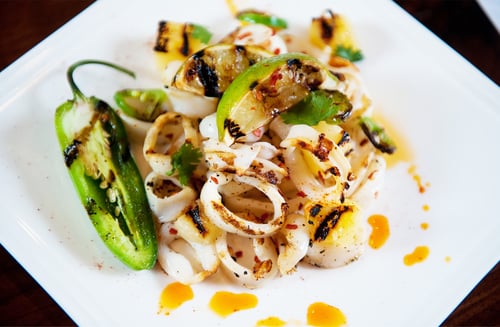 With a sharp knife, slit each squid tube lengthways so it lays flat, then slice the tube lengthways into two or three pieces. In a bowl, combine the pieces with the tentacles and set aside.

In a bowl, stir together the corn flour, 1 teaspoon salt and ½ teaspoon pepper and set aside.

In a frying pan, heat the one tablespoon oil over a medium heat. When the oil is hot, add the pineapple slices and cook, turning once, for three to four minutes on each side, until golden brown. Transfer the pineapple to a chopping board, cut into bite-sized pieces, then set aside on kitchen towel to drain.

Pour the oil to a depth of 2 in into a wok or high-sided pan and heat over a high heat to 375F on a deep-frying thermometer. Line a shallow bowl with kitchen towel. While the oil heats, prepare the squid. Divide the tube slices into three equal portions. Dredge each portion in the corn flour mix, lifting it out with a fine-mesh sieve and shaking off excess.

When the oil is ready, add one-third of the squid to the hot oil and fry for about 45 seconds, until golden brown and curled. Using a spider strainer or slotted spoon, transfer the squid to the kitchen-paper–lined bowl. Fry the second and third batches the same way, adding them to the bowl and always allowing the oil to return to temperature between batches. Ten seconds before the last batch of squid is done, add the jalapeño chillies to the hot oil, then remove them along with the squid.

In a large bowl, combine the fried squid and jalapeños, pineapple, toasted garlic, coriander and sugar and toss. Season with salt and pepper and serve immediately.

This recipe is extracted from Vietnamese Home Cooking by Charles Phan and is courtesy of www.theguardian.com/lifeandstyle/2013/aug/29/squid-pineapple-garlic-recipe