From humble humboldt to irresistible illex, calamari has become one of America’s favorite foods (and Rhode Island’s Official State Appetizer). But how did squid become calamari become a ubiquitous offering?

It started in the 1970s, when the flounder and cod fisheries around Rhode Island and Long Island were being tightly regulated. Wild squid was abundant, so with the support of fishery and economic development programs, chefs were encouraged to purchase squid in place of less-available seafoods.

When the Economic Development Administration of the Federal Commerce Department got involved, the program went national.

As early as 1975, squid is highlighted New York Time’s Food Talk column as an inexpensive, quality protein. The article includes not only a recipe for Squid Cacciatore with Linguini, but also directs readers towards the squid recipe booklet available from the National Marine Fisheries Services. 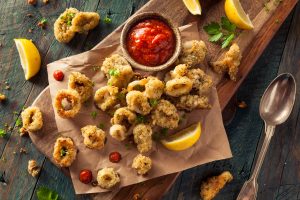 In addition to the Italian-inspired applications, federally-issued memos encouraged operators to treat the squid like other popular seafood dishes – that is, breaded and fried.

Chefs decided that the best way to introduce this food to newcomers would be fried, bite-sized, and as an appetizer. They also embraced squid's Italian name: calamari.

And it worked. Media mentions of calamari and fried squid continued to rise into the 1980s. Initially served at higher-end restaurants, it was considered an exotic item for adventurous and refined palates. But as the trend pushed forward, it became more and more common in restaurants of all kinds. By the mid-90s, it was ubiquitous.

The rise of calamari from obscure gastronomy to chain-restaurant staple drew interest from those who study food trends. Indeed, calamari’s rise became the Calamari Index, and the 16-year rise dubbed one “Standard Calamari Unit.” Food trends that lasted at least one S.C.U. usually survived to become mainstream foods.

Few food trends survive the test of time, but calamari continues to be one of them. From the operator perspective, calamari is profitable and versatile. Millennial consumers who seek out sustainable and wild-caught seafoods are discovering calamari all over again. When a food is a favorite of operators and customers alike, it is here to stay.