A Squid Market: The History of Calamari 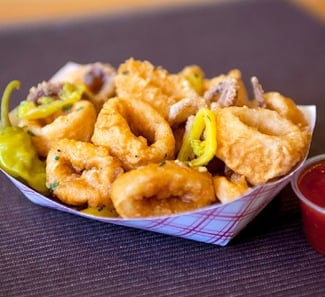 Fried calamari is a go-to appetizer for many restaurants and consumers alike. Tender calamari with a golden crust and tangy aioli sauce is the perfect start to any dinner or party. Yet it wasn’t always on the menu. Fried calamari first came into the public eye through a written article published by the New York Times in 1975. Since then, the American people have kept this welcomed dish in high demand. Although, the New York Times was the first media publication to recognize calamari as an ultimate game changer, calamari did not reach popularity until the early 1980’s. During that interim time, calamari remained a very exclusive dish, being offered only in high class and exotic restaurants in prominent cities such as New York and Boston.

By 1985, fried calamari was being mentioned throughout various forms of mass media, and its previous label as a dish only for the fortunate slowly dissipated. By 1996, calamari was relabeled as one of the most popular “trendy” foods available to consumers. During this time Calamari competed with other popular foods such as tuna tartare, ramen, and short ribs, all of which were also labeled as hip, progressive foods.

Recently, time has done away with the many of the once “trendy” and popular foods of the mid-1990’s. Very few dishes have been able to withstand the ever-changing trends, many losing the battle to the more modern and progressive foods of the millennium.

Calamari, however, has been one of the few dishes that have been able to compete with the changing palates of the younger generation. Even as the youthful tastes of the millennial generation enter the market, calamari still remains in popular demand. Calamari is offered in a variety of restaurants including national franchises and chains. Due to its profitability and versatility, restaurants are able to create signature dishes that are crowd pleasers and memorable. As time and taste progress even further we expect that there will always be a strong demand for this delicious treat.

- The Team at Town Dock