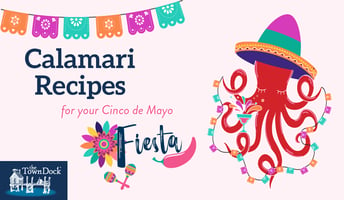 Originally, Cinco de Mayo (the Fifth of May) marked the Mexican army’s victory over French troops at the Battle of Puebla. Originally celebrated in the United States in southern California in solidarity to their Mexican neighbors, over the years, Cinco has spread to become a favorite American celebration nationwide.

While in Mexico, the day is usually marked with parades, dancing, and even battle reenactments, it’s a little different throughout most of the United States. Like St. Patrick’s Day, Cinco de Mayo has become a favorite American celebration of another culture mostly by enjoying their food and drinks.

When many people initially think Mexican food, they think beans, rice, and beef or pork. However, with two long coastlines on the Pacific Ocean and Gulf of Mexico, seafood (mariscos) was very much a part of life. Squid and octopus were both harvested off the Yucatan Peninsula, and traditionally pickled (en escabeche) or sautéed.

Of course, Americanized Mexican-style food isn’t always authentic, but it is delicious. And like with other cuisines, calamari shows itself versatile and cost-effective.

For example: if you are serving ceviche with shrimp and scallops, you can realize cost savings by swapping it for calamari or by added in calamari and reducing the portion of the more expensive proteins. The same principle applies to tacos, tostadas, enchiladas, and more.

We’ve also seen Mexican restaurants serve a beer-battered calamari appetizer dressed up with other ingredients they have on hand, like jalapeño rings, cilantro, and spicy aioli for dipping.

For your restaurant, we've put together our favorite Mexican-inspired calamari recipes - including one brand new and surprising risotto recipe we're really excited about! If you're a home chef, you can trim the recipes by about 1/3 to get four-person servings.