We all know and love traditional fried calamari. If you’re like us, it’s the first appetizer we look for on any restaurant menu. Thickly sliced, crispy calamari starts with great quality squid. What enhances the quality of this dish is an equally comparable beverage. The Prima Pils by Victory Brewing Co. is a true representation of a fresh pilsner beer. The term pilsner has largely been associated with mass-produced flagship beers, yet deserves more artisan credit than what has been given. The Prima Pils is constructed like a Czech-style pilsner—meaning it has more hoppy and spicy notes than most pilsner brews. Its light, dry finish is a perfect match for the equally light and crispy fried calamari.

The savory composition of this grilled squid dish is offset nicely by sweet pineapple. The combination of salty and sweet is joined by a spicy note of jalapeno peppers that is topped with a pinch of sugar. This well-rounded tasting dish should be paired with a beverage that enhances the citrus notes from the pineapples and balances the saltiness of roasted garlic. Harpoon Brewery Co.’s UFO Hefeweizen is an American wheat beer that is tart with notes of sweet malt. Its clean citrus flavor makes it a perfect pair with the grilled squid’s pineapple. The cloudy appearance makes for a foamy head that captures the flavor before it oxidizes. Its lightness offers a moderately dry wheat finish with great drinkability to compliment the savory tastes of the roasted garlic. 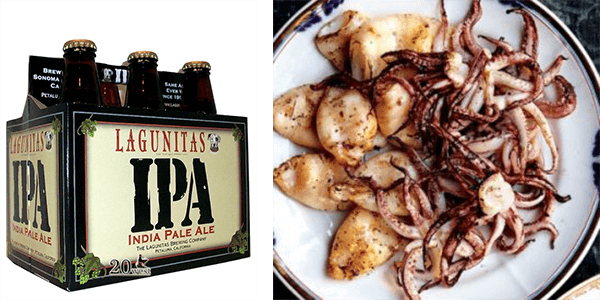 This easy-to-make grilled squid dish is lightly charred and seasoned with salt and pepper. The sesame oil gives it a savory flavor that will light up your taste buds. Its beverage counterpoint is one with stronger floral notes to offset the savoriness of the sesame. The Lagunitas IPA is an American-style IPA with enough hoppy bitterness to recognize its floral and citrus-like bite—especially during the first sip. The Lagunitas IPA webpage identifies its food paring match with the Hamachi Kama (also known as the yellowtail collar) which is widely viewed by chefs to be the best part of the fish. As a grilled dish that is typically seasoned with salt, soy, and citrus, the Hamachi Kama resembles flavor notes that are comparable to sesame grilled squid—making it an excellent pairing with the Lagunitas IPA.