These two squid species have quite a few things in common. They're both harvested in the northern Atlantic Ocean; they are both certified sustainable by the Marine Stewardship Council (MSC); both are trawl caught; both are product of the USA; and, of course, both are delicious!

Because of these similarities, we're often asked what the differences are between the two species, especially when buyers see that they come at different price points. Is one better than the other? Which is better for a restaurant or grocery store?

Let's start with a brief history. For much of its history in the northeast, squid was either considered a nuisance by-catch or bait for other fish. When overfishing put the brakes on some other common commercial species, the abundance of Longfin Inshore Squid turned into a blessing for the livelihood of many in the commercial fishing industry. As it was introduced into more and more restaurants, calamari gained popularity as an appetizer, eventually becoming both trendy and a long-lasting favorite. With so much of the Longfin squid landing in Rhode Island, it became our iconic seafood - and the official state appetizer.

As with any wild-caught species, there are years of robust Longfin catch, and years when the catch doesn't meet projections. In an effort to diversify our USA squid offerings, The Town Dock decided to develop the historically underutilized species of Shortfin squid into a second, high-quality product line. 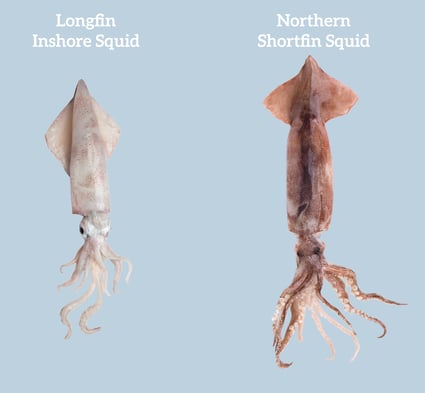 Now, let's look at the basics of these two squid, pictured here.

As you can see, Longfin squid typically have a lighter skin color and are generally a bit smaller and more delicate than their Shortfin cousins.

Of course, the age of the squid also impacts their size, so you can see some overlap. But in general, Shortfins are larger.

This is also true after they are processed. Longfin squid tends to have a more delicate texture, whereas the Shortfin produces a more robust and slightly thicker ring or tube. The Shortfin tentacles are also larger, which can be a pro or a con, depending on your take on tentacles! (We love them.)

In terms of actual fishing method, both are sustainably trawl caught. The fishing vessels - appropriately called trawlers - have large nets on the back of the boat, which is unfurled and pulled along to collect the squid.

If you're not careful, trawling can be hard on the habitat. But certified sustainable fisheries are required to show care, using technology to track squid schools and equipment like rockhoppers to minimize contact with the seabed. Additionally, the NOAA notes that, "sandy or muddy habitat, where squid are fished, is less sensitive to the impacts of trawling."

One of the differences in trawling for the two squid species is their respective habitats. As the name suggestions, the Longfin squid is an inshore squid, meaning it is caught closer to the shoreline. This means that the water is not as deep, that there tends to be more obstacles—anyone who has been to New England knows the shorelines are rocky!—and there is also more by-catch.

A quick note about by-catch: within the fishery management plans, there are steps to mitigate by-catch. For example, the Longfin fishery has a cap on butterfish, designed to help minimize impact to this species. Additionally, we use all the by-catch we can, including selling fluke, seabass, scup, and more through our wholesale fresh fish program.

Shortfin squid live further off shore, in the cold, deep waters of the North Atlantic. Due to their surroundings, they tend to form larger schools.

It's also worth noting that Shortfin squid requires additional care in handling—it's a little more sensitive to temperature after catch. However, it can be mitigated with the right equipment onboard to maintain them as needed.

And finally, the most important question: how do they taste?

In the end, all calamari has a mild flavor and is delicious prepared fried, grilled, sautéed, roasted, and more. All of The Town Dock's calamari undergoes careful quality control to ensure an optimal texture and flavor.

Longfin squid is slightly more delicate and has a sweeter flavor and an appealing bright white color. The smaller size means more rings per pound. As the Shortfin squid is a slightly larger squid, it also has a somewhat more robust ring and tube, which offers better plate coverage.

Which is the best one? It's truly a matter of personal preference. Some chefs are true believers in our Longfin squid, Rhode Island Calamari®, and for them it is the best calamari on the market and no other will do. Others like the slightly more savory flavor of the Shortfin squid, Premium Domestic Calamari, and also appreciate that they can offer a USA, certified-sustainable seafood at a competitive prices.

The same is true for those who cook calamari at home - both are delicious options that fit seamlessly with a variety of dishes. While some might notice the difference between the two, some people won't, and will be thrilled to enjoy this restaurant-quality calamari at home.

Are you a foodservice professional interested in learning more about our calamari? Click the button below or drop us a line at info@towndock.com or 4041-789-2200/

Are you a home chef looking for our calamari at a grocery store near you?